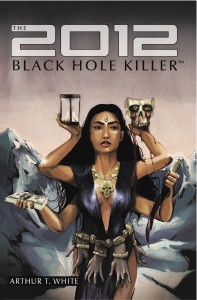 As the world anxiously awaits the supposed apocalypse on December 21, 2012, Arthur T. White provides his own spin on the doomsday theories in his novel, The 2012 Black Hole Killer. This bizarre science fiction mystery novel begins with two detectives who discover the frozen body of the protagonist, Dan Eagle, floating in midair during a heat wave. After being unfrozen at the Yale-New Haven Hospital, Eagle teams up with the two detectives, a psychiatrist, and a member of the Kenyan royal family, to stop the Hindu Goddess Kali from creating a devastating black hole and destroying the universe on the fateful day of the 2012 winter solstice. Undeniably unique, this novel defies convention, weaving together a quirky, page-turning read with compelling insights into religion, physics, and, of course, the 2012 doomsday theories.

The recent fascination with the 2012 apocalypse has spread throughout popular culture, and stems from the ancient theory that the Mayan calendar ends on the 2012 winter solstice. According to Mayan literature, the gods created three worlds, all of which had failed, before finally successfully producing the current world we live in. The legends dictate that each world survives for 13 b’ak’tuns, which is an equivalent to 5,125 years. Thus, because our current world was created on August 11, 3114 B.C. according to Mayan beliefs, 13 b’ak’tuns from this date would coincide precisely with December 12, 2012, and consequently, this date would mark the end of the world.

Although the conflict within White’s novel revolves around the 2012 doomsday, the narrative does not delve into the rationale of the Mayan calendar. Instead, White uses the phenomenon as a starting point and combines theoretical physics and Hindu mythology to weave a distinctive storyline that grapples with important questions regarding the cosmic fate of the universe. In the novel, Kali starts to become preoccupied with dark matter and its future implications. She considers the case of the Big Crunch, which is a cosmological theory regarding the end of the universe. It suggests that the universe will one day cease to expand and then begin to contract, pulling all matter into one condensed point. Then, it is speculated that a new Big Bang would birth a new universe from that singular point.

However, Kali is skeptical of the theory and believes that the Big Crunch will never be realized, leaving the universe to expand indefinitely. Her solution to this problem is to create a massive black hole on the day that the Mayans predicted the end of the world. To do so, she utilizes the concept of the famous Large Hadron Collider of the European Organization for Nuclear Research (CERN) to create an even larger particle accelerator that is capable of creating black holes. Discovering her malicious intentions, Eagle and his friends work to stop the goddess from destroying the universe. Through a series of encounters with Kali from New York City to Kenya, battles with ancient artifacts, and revelations of Hindu mythology, the story unfolds until the group faces Kali on the summit of the K2 Mountain on the China-Pakistan Boarder for their final battle.

Though the plot introduces a vast array of bizarre twists, the novel is fast-paced, and this style produces a pleasantly refreshing and certainly unforgettable read, given that the reader is willing to accept the premise and the shocking turns as they come. With astrophysical applications, mythology, and the most unconventional characters, The 2012 Black Hole Killer is both thrilling and informative. However, the novel does have its faults. At times, White can inundate readers with mythological allusions, which can become so tangential that it distracts the reader from the central plot. For example, the novel veers into a detailed account of the tale of Ganesha, the Hindu God with an elephant head, when the detectives are examining Eagle’s frozen body. Though it does provide an interesting perspective relating Hindu mythology to the Mayan doomsday, it can disrupt the flow of the narrative. In addition, the eccentric storyline may be a bit shocking and off-putting for some. But despite these issues, The 2012 Black Hole Killer is an exhilarating science fiction novel that offers a strikingly creative interpretation of the doomsday phenomenon that anyone can enjoy.