Five Things You Didn’t Know About Scientific Discoveries at Yale 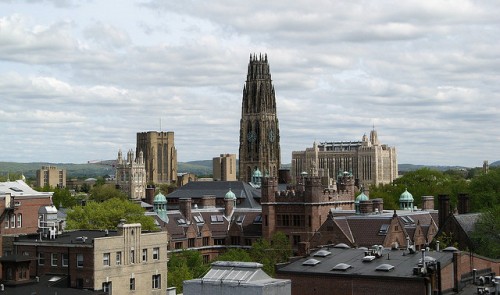 Rated by U.S. News and World Report as one the world’s best colleges for the social sciences and the humanities, Yale University is also home to distinguished scientists who have revolutionized their respective fields of research. Here are five things that you may not know about famous scientific discoveries made at Yale:

Gibbs Free Energy: J. Willard Gibbs graduated from Yale College in 1858, and he was later appointed a professor of mathematical physics in 1871. Among his many contributions to the field, Gibbs introduced the concept of free energy (denoted by the letter G) to predict whether or not a chemical process would occur spontaneously at constant temperature and pressure. Qualitatively, if G is negative it indicates that a reaction is spontaneous, while a positive G value implies non-spontaneity. Since spontaneous reactions are necessary for all living organisms, Gibbs’ contributions have been remarkably important in our understanding of chemical and biological systems.

Fast Multipole Method: As one of the top ten algorithms of the 20th century, the fast multipole method (FMM) is a physicist’s best friend. The algorithm was co-invented by Dr. Vladimir Rokhlin, who joined the department of computer science at Yale in 1985. It is used to solve a classic problem in mathematical physics called the n-body problem, which determines how the gravitational attraction between two or more bodies affects their motion. While the motion of two bodies can be solved analytically, three or more bodies make the problem immensely complicated. Thus, using a computer to implement the FMM algorithm enables scientists to solve the problem more efficiently. The FMM has a wide variety of applications in physics, from studying planetary motion to describing electromagnetic phenomena.

Suppressor T cells: Balance is a central tenet of nature, especially in the human body; a variety of key functions are constantly “turned on” and “turned off” in an effort to achieve equilibrium. From his research in the early 1970s at the Yale School of Medicine, Dr. Richard Gershon discovered that the immune system is no exception. While the role of T cells in fighting infection was already understood, Gershon found that a specialized kind of T cell could suppress the activation of the body’s immune system; he called them regulatory T cells. The discovery that T cells could both activate and inhibit the immune response was a major contribution to the field of immunology. His findings also suggested that excessive regulatory T cell activity could weaken the immune response, making the body very prone to infection. Therefore, manipulating suppressor T cell populations can provide therapeutic treatment for patients with autoimmune diseases such as multiple sclerosis.

The Great Dinosaur Rush: Thanks to Othniel Marsh’s research and numerous fossil discoveries, the U.S. became a global leader in the field of paleontology. Marsh graduated from Yale in 1860, and later returned to become the first professor of vertebrate paleontology in the U.S. In the 1870s he discovered, named, and classified hundreds of dinosaur fossils, including Allosaurus, Stegosaurus, Triceratops, and the first pterodactyl fossil found in America. Marsh also convinced his uncle to establish the Yale Peabody Museum of Natural History. Although he attracted controversy for an intense fossil-collecting competition known as the “Great Dinosaur Rush,” against contemporary paleontologist Edward Cope, his extensive explorations of the western U.S. are invaluable contributions to the paleontology of extinct North American vertebrates. In fact, his descriptions of toothed birds and multi-toed horses were recognized by Darwin as one of the most important examples of evolution.

The Milgram Experiment: In July 1961, Yale psychology professor Stanley Milgram conducted one of his most well-known and controversial experiments in Linsly-Chittenden Hall. Influenced by historical events such as World War II, he sought to answer a central question: how easily can ordinary people be influenced to commit atrocities? In his study, each participant played the role of a “teacher” and questioned a “learner” on the other side of a wall. The teachers were instructed to administer an electric shock to the learners for every incorrect response, and increase the shock intensity with successive mistakes. If a teacher refused to administer a shock, a supervisor would urge him or her to continue, despite evident signs of pain from the learner. Of course, there was no real electric shock and the “learner” in the other room was merely a recording — but the ordinary teacher did not know that. But shockingly, Milgram found that most participants continued to the highest level of shock. Though his procedure raised ethical concerns, the human tendency to obey authority against our better judgment was an essential finding in social psychology.