It is estimated that nowadays only a third of American eighth-graders can read proficiently and up to twenty percent of youths have some sort of reading disability. Moreover, students lacking in basic reading comprehension skills often struggle in other academic areas as well, which provides yet another barrier to entering college.

In their new state-of-the-art research facility, the scientists of the Haskins Laboratories are pioneering cutting-edge language, speech and reading research. As one of the nation’s leading private research groups in this field, Haskins Laboratories employs about fifty investigators that perform truly multidisciplinary work ranging from behavioral studies of language use to imaging studies of how the brain processes language.

In the seventy-three years of its history, Haskins’ scientists have developed a wide range of speech- and reading-related research programs. In one fortuitous case, early work in creating a reading machine for the blind stimulated research that ultimately led to the discovery of “phonemic awareness”, an important pre-requisite for learning to read.

Given the gap in literacy among American youth, one research project at Haskins Laboratories is now focused on understanding individual differences in comprehension ability in under-performing young adult readers. As scientist Dave Braze remarked, “By focusing on a demographic that is mostly not college-bound, our research has practical goals for understanding what limits their ability to obtain post-secondary education, and may provide insights for educational policymakers and teachers in the classroom.”

Braze studies individual differences in language comprehension in adolescents, and has found strong correlations between one’s vocabulary and reading ability. His research builds upon long-standing findings by Haskins researcher Don Shankweiler and others, which describes how awareness of phonemes, the building blocks of sound structure, is essential to beginning readers. Individual differences in phonemic awareness can be measured by performance on tasks that require manipulation of these sound structures.

These tests can be used to predict how easily pre-readers learn to read. As the length and difficulty of these tasks gradually increases, those who perform better tend to pick up reading comprehension skills more quickly as well.

Building upon this early foundational research, Braze and his colleagues have discovered that phonemic awareness is not only crucial for young children learning to read, but also accounts for differences in the abilities of older readers. Moreover, they have uncovered a link between knowledge of word meaning and reading comprehension.

While the reading materials used in experiments were lexically simple and contained no words beyond the grasp of a middle school student, those with stronger vocabularies consistently outperformed those with weaker word knowledge. Braze hypothesized that those with broader word knowledge could better put words together in combinations and more easily extract richer meanings from the strings of words that make up everyday speech and writing.

In addition, these studies indicated that two factors that have previously been implicated in vocabulary development, verbal memory and experience with print, account for the majority of differences in individual word knowledge. While both memory and experience contribute to building high-quality lexical representations, verbal memory is also involved with accessing and using of word knowledge quickly and easily.

This is necessary because the transient stimulus of language must be translated into meaning within a limited period of time. To summarize, this study found that weaknesses in vocabulary can exacerbate weaknesses in decoding skills. These findings suggest that reading instruction for poorly literate adults should focus on vocabulary development as a way to improve comprehension.

Another Haskins scientist, Dr. Julie Van Dyke, hypothesizes that poor literacy can be associated with deficiencies in memory operations, particularly when there are interfering clauses that can obstruct the intended meaning of a sentence. The concept of “interference” is well-established in psychology and first developed in memory studies by Yale psychologist Robert Crowder and others in the 1960s and 70s.

Van Dyke is extending this work into the domain of language comprehension by pioneering a technique called the speed-accuracy tradeoff method to study individual reading differences in adults with low literacy levels. This technique involves giving subjects a lengthy but grammatical sentence to interpret, and requiring them to make extremely fast judgments about whether the sentence is grammatically correct.

Each complex sentence contains interfering clauses that distract readers and strain their memory to keep all of the information accessible. For example: “The client who the assistant forgot had said that the meeting was important objected.”

Though this is a complex sentence, an ordinary reader can discern that the subject is “client” and the verb is “objected.” However, when the word “meeting” is replaced with “visitor”, this sentence becomes much more difficult to understand. Van Dyke’s theory postulates that a person will immediately search for the verb’s subject, and will naturally be distracted by the word “visitor.”

Though this cannot be the subject grammatically, it does work semantically, if the words “visitor” and “objected” were taken out of the sentence context. Since the word “meeting” doesn’t fit semantically as a subject for the verb “objected”, it does not produce interference and the original sentence is easier to understand.

Van Dyke modified this technique so that words and sentences are spoken aloud, and subjects can also take the time to make slower and repeated judgments, precisely once every 300 ms at the sound of a beep. This setup still allows subjects to make their decisions as soon as possible, but they are able to change their minds as they continue to process the sentence.

The series of responses produces an individual record of the subjects’ comprehension evolving over time, and demonstrates how quickly their verbal memory can access the subject of a sentence. The shorter the response time, the more immediate the memory and the less interference involved.

Van Dyke has found that having a distracting word that fits semantically, but not grammatically, increases a person’s response time and decreases comprehension accuracy. In other words, having a word like “visitor” instead of “meeting” increases the response time and reduces the accuracy, as the semantic correctness of the word “visitor” further distracts the reader from the actual subject, “client.”

In a related study showing how memory and language interact, readers were given a list of three related nouns to memorize that either could or could not semantically fit with the verb of the sentence. Van Dyke found that in the case where the nouns matched as subjects for the verb, there was a “cue overload” effect where the memory list words interfered with the actual subject for the sentence, and the additional strain on memory made retrieval more difficult and prolonged.

These results provide evidence that memory is clearly implicated in language, and that verbal memory may operate by mechanisms similar to memory in other domains.

The recent development of new technologies has greatly broadened the horizons of linguistic research. One novel technique utilizes an eye-tracker to examine where a reader’s eyes are focused while reading a page.

Modern eye-trackers use specialized video cameras to capture infrared images of the reader’s eyes. Image processing software translates these images into gaze coordinates over a field of view, which often consists of sentences on a computer monitor. The advantage this method offers over “off-line” techniques like reading comprehension tests is its ability to reveal subconscious and automatic processing activities occurring during language comprehension.

For example, one study has uncovered processing differences between syntactic and pragmatic information in sentences, using sentences containing pragmatic or syntactic anomalies like those illustrated in Figure 1. As Figure 2 shows, syntactic anomalies induced a temporary spike in regressions immediately upon the reader’s initial encounter of the error, while pragmatic errors led to progressively increasing regressions until the end of the sentence.

Further analysis revealed that syntactic anomalies specifically induce regressions around the verb, but these quickly decrease to normal levels. In contrast, pragmatic errors cause longer reading times upon the first-pass with the error, followed by numerous regressions that continue until the reader reaches the end of the sentence.

Interestingly, comparing the gaze patterns of more- and less-skilled readers shows clear differences even in simple sentences (figure 4). In general, poor readers have more frequent and longer fixations, and more often backtrack to fixate on difficult parts of a sentence.

Able readers tend to move more fluidly and linearly through the sentence. For more difficult sentences, Braze and others have found that differences in gaze patterns result from individual differences in word knowledge, rather than differences in speech comprehension or decoding skill.

Another new technique in wide use is functional magnetic resonance spectroscopy (fMRI), which allows scientists to visualize the regions of the brain that are activated in response to particular stimuli based on blood-oxygen level dependent (BOLD) contrast.

It is well-established that activated neurons require more oxygen, and hence, more blood flow to their region of the brain. Levels of oxyhemoglobin peak after a 4-5 second delay, and then fall back to resting state levels. Since hemoglobin is diamagnetic when oxygenated and paramagnetic when deoxygenated, they respond differently to magnetic pulses under different concentrations of oxygenated hemoglobin.

Higher amounts of oxygenated hemoglobin increases the BOLD contrast because this diamagnetic hemoglobin will differ more from the surrounding tissue’s magnetic susceptibility. In short, areas of the brain that have actively firing neurons will literally “light up” in an fMRI scan, allowing scientists to easily pinpoint areas of the brain associated with various activities. Together with other colleagues at Haskins, Braze and Van Dyke are conducting several studies to identify the regions of the brain activated during sentence comprehension. Each fMRI scan is analyzed given the subject’s vocabulary, listening, verbal memory, general IQ levels, age and education levels.

Figure 3 shows a sample MRI composite map that illustrates the brain regions that become sensitized after encountering sentence anomalies. This study also demonstrates the correlation between fMRI scans and eye-tracking studies, thus proving the applicability of these new technologies in linguistics research.

The Promise of Eliminating Illiteracy

“Brain work is very sexy,” says Van Dyke. “It’s very appealing to show a picture of the brain, but there is a lot of basic behavioral work which must be done first in order to interpret what those pictures are really telling us.”

By combining cutting edge neuroscience technology with traditional psychological and linguistic methods, scientists at the Haskins Laboratories are advancing our understanding of literacy and using hard, scientific evidence to support new educational initiatives. Thanks to their research findings, we may eventually eliminate illiteracy amongst schoolchildren and give everyone the opportunity for higher education and opportunities.

In the immortal words of Dr. Seuss, “The more you read, the more things you will know. The more that you learn, the more places you’ll go.” 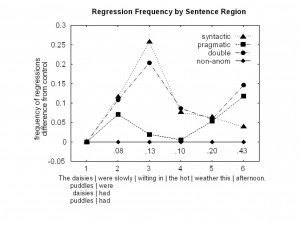 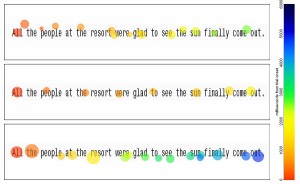 The author would like to thank Dr. Dave Braze and Dr. Julie Van Dyke of the Haskins Laboratory for sharing their research for this article.

SALLY TAN is a sophomore in Pierson College. She wishes she had more time to practice her comprehension abilities outside of reading biology textbooks.