Smell then tell: New neurons in the adult brain receive signals before forming synapses of their own 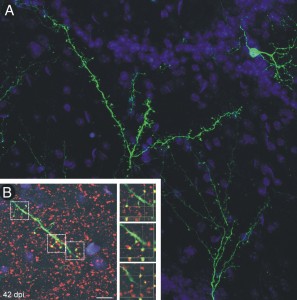 “Smell is cool,” quipped Charles Greer, professor of neurosurgery and neurobiology at the School of Medicine, when asked how he would summarize his research on the neurological workings of the olfactory system for a five-year old.

When the question was revised, asking how he would summarize it for a fifteen-year old, Greer replied, “Smell is hot.” These are vague yet oddly representative descriptions of his latest findings: new neurons receive information before sending any of their own.

Greer and M.D./Ph.D. candidate Mary Whitman recently discovered that newly-generated neurons in the area of the brain responsible for the sense of smell receive signals from higher brain regions before being incorporated into mature synapses. Their research focuses on the olfactory bulb, which processes all olfactory information coming from receptors in the nose going to the cerebral cortex.

The olfactory system is one of the most complex sensory systems in the brain. Over 10,000 new cells are added to the olfactory bulb every day to help us discriminate between the countless novel odors we experience daily, making the region a prime target for studying how new synaptic connections are formed in adults.

Previous research established that neurogenesis, the process by which new nerve cells are created, occurs in only two places in the adult brain: the olfactory bulb and the hippocampus, a region involved in memory formation. However, it was not known how new neurons were integrated into the overall circuitry, and there was no conclusive evidence showing how synapses are formed from adult-generated cells.

Greer and Whitman discovered that these new cells become fully integrated into the existing network in the olfactory bulb and even showed how this process occurs. Ten days after generation, these neurons first receive input from higher cognitive regions and only form reciprocal synapses at day 21.

Fibers from other areas of the brain form the first synapses on the new cells, suggesting that these other brain regions may have a high degree of control over their maturation, connectivity, and survival. “These regions are talking to the cells prior to them passing any information on, and that’s a unique observation,” Greer said.

Research conducted on the activity of new neurons in the adult brain has important clinical implications both in treating brain damage and in understanding normal functioning. The hippocampi of schizophrenia and depression patients exhibit decreased neurogenesis.

According to Greer, knowledge about adult neurogenesis “contributes to a better understanding of the brain’s ability to continually repair or rewire itself,” and will hopefully lead to improved treatment. Though medicine is still far from clinical use of stem cells, Greer’s work advances how clinicians will be able to use stem cells to help adults recover from neurodegeneration or other loss of neural functioning.

“There’s a lot of excitement about possibility of using neural stem cells to replace neurons lost to injury and disease,” Whitman declared. “But it is important to know what they’re doing in their normal context before trying to get them to do something else.”