It is the rare scientific concept that manages to crossover to the vernacular. It is even rarer that the concept becomes essential to the standard ninth grade social studies curriculum, but diffusion has done it. You may have been introduced to the concept through a discussion of cultural diffusion in your humanities classes or your science teacher let you experience it firsthand with glucose solution, dialysis tubing, and a starch indicator.

Most of us feel comfortable with the idea of diffusion and could give a basic definition: Diffusion is the process by which molecules (or suspended particles) move across a concentration gradient, moving from areas of high concentration to areas of low concentration. Most of the time.

Charles Soret predicted this effect in the 1800s after conducting research on salt distributions over temperature gradients. His equations were influential in late nineteenth century petrography (the study of rock classification), but major research did not begin until the 1930s when the need for laboratory methods to separate isotopes arose.

At Yale, Nobel Laureate Lars Onsager developed a theory for the performance of thermal diffusion separation columns which is still in use. Today, Rosner’s lab focuses on Soret effects in combustion reactions and related processes, where the effects can be quite pronounced.

According to Rosner, “During a combustion reaction, gas temperatures are higher than 2000 degrees Kelvin, but the container must be kept at a much lower temperature. This leads to local temperature gradients of over 106 K/m.” By experimenting in these high-pressure, high gradient conditions, Rosner can quantify the extent of the Soret effect and its relevance to modern engineering.

One set of Rosner’s experiments focuses on what he calls ‘Soret-shifted dew-point temperatures.’ During combustion in marine environments, salt-containing vapors move across metal surfaces (e.g. turbine blades) and may condense, depositing molten salt on these surfaces, and eventually corroding the material of the surface.

Engineers must be able to predict at what temperature the vapors will condense (the dew-point). Models that rely only on Fick diffusion can severely underestimate this dew-point temperature because they make assumptions about the distribution of particles in the vapor.

When Soret effects are incorporated into the model, Rosner’s group finds that the dew-point temperature is shifted 30 to 40 degrees Kelvin above the ‘thermodynamic’ dew-point. Ignoring this shift can result in significant costs due to corrosion damage. The same processes that deposit corrosives can also be used to create high-value thin films by depositing doped silica to create specialty glasses.

Rosner’s work is clarifying the magnitude of the Soret effect in such situations, advancing both theoretical understanding and practical applications. As his work demonstrates the engineering importance of the Soret effect, an appreciation of the complexities of “non-Fickian” diffusion may well spread beyond the scientific community.

Platten, J.K., Costesèque, P. (2004, July). Short Biography of Charles Soret on the Occasion of the Hundredth Anniversary of His Death. Retrieved November 2007, from the European Group of Research in Thermodiffusion E.G.R.T. at IMT6 Web site: https://www.mondragon.edu/eps/imt7/contenidos/soret.htm 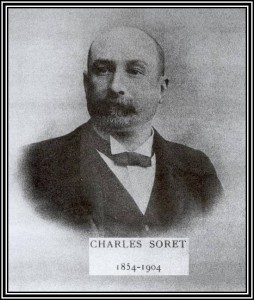