The Art of Science and the Science of Art 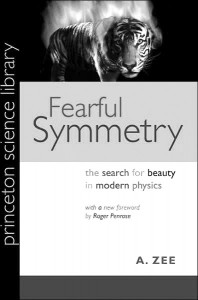 Too often we divide intellectual approaches so that we segregate the scientific from the artistic, or the “objective” from the “subjective.” We ascribe our perspective to one school of thought or the other and miss the parallels and enriching insight that their mutuality offers.

Anthony Zee’s Fearful Symmetry: the Search for Beauty in Modern Physics distinguishes itself in its attempt not only to draw the parallel between science and art, physics and aesthetics, and Nature and beauty, but also seeks to construct a way of seeing that uses both scientific and artistic approach. Just as art historians must train their eye, Zee explains, the physicists must train theirs “to see the universal principles guiding Nature’s design.”

Zee’s analysis and compilation of theories is instrumental not only for our conceptualization of fundamental physics, but also for our understanding of aesthetics. He grounds something as subjective as beauty in the concrete evidence of modern physics and subsequently in the scientific basis on which life is founded.

By identifying the mystical and miraculous success of Nature with a geometric foundation, Zee constitutes a structured standard for beauty, something that many seminary art historians sought to outline and constructively articulate.

Nature has defined the terms of beauty. Symmetry is identified and established as the cornerstone of all beauty. Our understanding that life at its best manifests geometric principles and bilateral symmetry outlines our expectation and perception of beauty.

Our viewing of art is egocentric: the viewer is drawn to that which he or she identifies with and projects anthropomorphic parallels onto an artistic subject. From the same perspective, we can see the human form as being the epitome of Nature’s beauty. The ideal beauty must mimic nature: it must be proportioned, balanced, and symmetrical. We base our values and ideals off the system of symmetry constructed in nature.

Thus, what we define as “beautiful” art is either symmetrical itself or implies some sort of symmetry and subsequently is some form with which the viewer can identify. Even in art that seeks to abstract itself from natural form, it can be argued that there is implicit naturalism bound by physical reality. Artists, too, are subjected to the power of fundamental physics; they are completely contextualized by their surroundings, by Nature, and by science.

Beauty is not arbitrary. As Zee tells us, “Nature’s rules… are dictated by the same general principle of symmetry and linked together in an organic whole.” For example, in the 1950s the discovery of chirality, or handedness, revolutionized the perspective of a system based on left-right distinction.

Zee described it as a reflection of Nature’s bias, something he himself undermined with exceptions to the rule of parity, and further suggested its relevance as a product of a bilaterally based system. In fact, humanity operates in a system based in bilateral symmetry—a left-right system—because of scientific design.

reassures the artist, art historian, and humanitarian that beauty, despite all its philosophical complexity, subjectivity, and ambiguity, is founded and echoed in the very fundamentals of Nature and of life. It is a product of the laws of physics.

In turn, it reminds the physicist and all his fellow scientists to recognize aesthetics as a legitimate method of analysis by which to understand the principles of Nature’s design. It makes seeing that much more intellectually stimulating and ultimately satisfying.