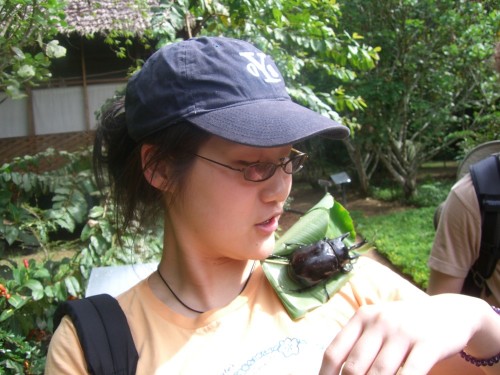 Last March, Sun Lee, SY ’09, found herself with fourteen other Yalies, a professor, and a guide in the rainforest of Peru, slashing her way through the underbrush in search of plants. As part of the Rain Forest Expedition course, led by Molecular Biophysics and Biochemistry professor Scott Strobel, Lee was searching for plants that possibly hosted endophytes that would target cramps and other medical conditions associated with women’s health.

Having gone all the way to Peru in search of plants such as Sachapapa, Lee has long understood and embraced the idea of scientific discovery. “Discovering new things is really fun,” Lee says.

Lee got her first real experience with discovery on a trip with other explorers to Alaska. There, she accompanied and witnessed scientists in the field, and she became fascinated with their dedication and passion for their jobs. Regardless of what they were investigating, even if it was as a seemingly boring topic such as ice worms, these scientists were able to communicate their passion and excitement to her.

In the rainforest course, students like Lee are able to develop their own research project. Operating in a separate lab from Strobel’s, students come back from their trip armed with plants that they screen for endophyte extracts.

The students chose the plants, the diseases, and the experiments. When it came to choosing an illness to target, Lee knew immediately that she wanted to study something regarding women’s issues. “Women’s issues have always interested me…these two different aspects of my life had finally clicked!” she recalls.

The importance of health women’s health issues, Lee says, is often understated. According to her, 50 percent of women suffer from menstrual cramping, “which is the number one cause of absenteeism.” Absenteeism, which refers to skipping work or school, has a greater impact on the work place than some people might realize.

“You don’t think about it…but if you look at menstrual absenteeism on a wide scale, it’s a problem. Resolving health issues is important for getting women on equal footing [in the professional world],” Lee explains. Although absenteeism might impact a woman’s performance or presence at work for only two or three days a month, Lee believes that the importance of the issue should not be dismissed.

With knowledge of what she wanted to study, Lee found herself in a unique position of freedom, a concept which is foreign to most undergraduates working in research labs. While many young researchers might find themselves doing unexpected work, Lee was able to design and direct the majority of her project.

In a field that has “very few and far-between awards,” Lee cherishes the freedom that she received. “In theory,” Lee explains, “science sounds so clean and perfect. But when you get into the lab… it’s a mess.”

Although she recognizes the difficulties of the research life, Lee has faithfully stuck with her research long after the trip to Peru. After isolating plant extracts to be used in the laboratory, Lee finally found a lab in which to conduct her ambitious research. Cramping, she says, is caused by excess prostaglandins and she wanted to use her extracts to inhibit prostaglandin processes. “I’m planning on getting fetal membranes from placentas, and [I will] subject them to a bacterial derivative,” she says of her near-future research plans.

“When the cells are confronted by the derivative, they will activate inflammatory pathways that will release these prostaglandin products,” she explains. After activation, Lee intends to introduce her endophytic extracts into the system to observe possible reduction of inflammation. Working from the depths of the rain forest to a lab at Yale, Lee hopes her research will help contribute to women’s health.