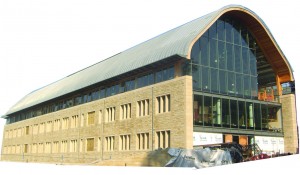 For as long as current undergraduates have been at Yale, two or three university buildings are have been under renovation or construction each year. With the possible addition of two new residential colleges and extra class space, Yale’s campus may never be free of blue tarp and sledgehammers.

However, Yale is taking advantage of this moment to become a leader in sustainable design. From the construction of the Malone Center to the future completion of Kroon Hall, Yale may achieve this title soon.

Sustainable design is an international movement that has increased in popularity along with the growing awareness of global warming. According to the “Climate Change 2007” report by the Intergovernmental Panel on Climate Change, atmospheric carbon dioxide concentrations have increased by 99 parts per cubic meters since the before the Industrial Revolution. Similar trends have been found for methane and nitrous oxide concentrations, the sources of which are likely fossil fuels and agriculture.

The result is rising global surface temperatures and rising sea levels. Sustainable design is a reaction to these trends through the configuration of building environments that, in their construction and usage, require less water, material, and energy resources without sacrificing architectural functionality.

These goals, which were considered in the design of Kroon Hall, the Malone Center, the Sculpture Building, and the Class of 1954 Chemistry Research Building (CRB), focus on making a building carbon neutral and, if possible, carbon positive.

Origins of Sustainable Design at Yale

Yale’s focus on sustainable design, however, is in no way new. Professor James Axely of the Yale School of Architecture described how Payne Whitney Gym is an example of sustainable design common in pre-World War II buildings. Built in 1932, “the building is comprehensively day lit, it uses natural ventilation … [and] in some places it has a mix of natural and mechanical ventilation of what we would now call hybrid ventilation which is considered a leading edge strategy.”

Natural ventilation reduces the need for air conditioning, especially needed in gymnasiums where population density and activity are high. Natural ventilation was necessary and common in pre-WWII buildings due to scarce fuel supply and the then significant cost of energy.

Energy efficiency became much less of factor in building construction and operation after World War II when fuel prices in the United States decreased significantly. The Art and Architecture building on York Street, which is currently under renovation, is an example of post-WWII architecture which was designed to rely heavily on heating and cooling systems.

Now that building materials, water and energy conservation, and carbon emissions are limiting factors in building design, Yale’s current push for sustainable buildings bears much similarity to the construction of Payne Whitney Gym over a half-century ago.

Recent interest in sustainable design began with the 1998 “Yale Green Plan,” put forward by the Yale Student Environmental Coalition, which asked the University, in an atmosphere of increased support for the environmental sciences department and campus environmental research opportunities, to reduce campus energy consumption and to introduce sustainable construction practices.

This plan led the Office of the Provost to establish the Advisory Committee on Environmental Management in 2001, chaired by the Forestry School Professor Thomas Graedel, expert in industrial ecology.

Based on the committee’s suggestion, the Office of Sustainability was founded in 2005, to be led by Director Julie Newman. That year also marked the completion of the Malone Center and the CRB.

“And yet,” continues Professor Axley, “[Payne Whitney Gym] was built right at the beginning of the depression at the time when Yale could demonstrate to the world they could afford to undertake such a large building project.

So even that building, from one of the wealthiest campuses in the world was being at that time concerned with a sensible use of energy and appropriate technologies to achieve it.”

Similarly, Yale is again investing heavily in energy efficient sustainable design although it has a current endowment of $22.5 billion and a constant need for more class and laboratory space.

In a speech before the University of Copenhagen, President Levin emphasized the importance of universities to increase environmental research, the use of environmental technology, and student education about environmental issues. He used Yale as a model to express the university’s role as a leader in campus sustainability in the face of concerns about global warming.

The Malone Center and Kroon Hall

Standardization of sustainable design came with the establishment of the LEED Rating System by the U.S. Green Building Council in 1998. LEED, which stands for Leadership in Energy and Environmental Design, scores new construction and renovations according to the building’s water efficiency, energy performance, and material efficiency, among many other requirements.

This rating system has established criteria to which many current building project attempt to achieve, with a maximum score earning a LEED Platinum certification. The American Embassy in Bulgaria and the Bronx Library are among the hundreds of LEED certified buildings.

Yale began its use of the LEED Rating System five years ago with the design of the Malone Center. According to Jerry Warren, P.E., Associate Vice President of the Office of Facilities, Construction, and Renovation, LEED was used initially as a design guide and a reference to measure the feasibility of the project. “[LEED] also provides data used to calculate Green House Gas reduction and the financial value of our investments in sustainability on each project.”

The Malone Center was the first building at Yale to which the LEED Rating System was applied. Among its features, the Malone Center uses purified rain water for toilet flushing in order to reduce water consumption. North-facing glass windows provide natural day light, and an automatic ventilation system manages and conserves heat exhaust.

In its construction, locally manufactured materials and Forest Stewardship Council certified wood were used in the buildings infrastructure. Also, the majority of the construction waste was recycled. The result of these efforts was a LEED Gold rating.

The Class of 1954 Chemistry Research Building and the Sculpture Building have received a LEED Silver and Platinum rating, respectively. And yet, Mr. Warren notes that the use of LEED Rating System as criteria for new construction may not be sufficient.

Architectural firm Hopkins Architects and sustainability consultants Atelier Ten went beyond LEED to make Kroon Hall into what is hoped to be the greenest building in the United States. In his lecture, Bellew described how the design of the building, set to open this year, required data collection and modeling to achieve carbon neutrality.

Climate analysis involving psychrometric charts of New Haven, which graphed the humidity versus temperature, were used to determine the most comfortable indoor conditions and the mechanical systems needed to reach it.

The building will be pressure tested to ensure that there are no air leakages which may cause heat loss in the winter. Sun angles and shadows from adjacent buildings were observed in order to determine the feasibility of a photovoltaic (solar paneled) roof, a design feature that is projected to offset its cost in less than thirty years and keep Kroon off Yale’s general power grid.

This last feature clearly demonstrates Yale and the forestry school’s commitment to sustainable design and the potential to build a carbon neutral facility which surpasses LEED Platinum standards.

Sustainable Design and the future of Yale’s Campus

In 2005, President Levin promised that Yale would reduce greenhouse gas emissions by 10 percent below 1990 levels by 2020. With the establishment of the Office of Sustainability and its student arm, Student Taskforce for Environmental Partnership, Yale has worked to inform its faculty, staff, and students of the benefits of more environmentally conscious behavior.

A change in campus behavior is not the only way in which the university has tried to meet President Levin’s promise. Sustainable design damps the increase of greenhouse gas emissions entailed in plans for campus expansion.

Yale plans to continue this path with future construction projects. According to Mr. Warren, although high LEED certification may not be possible, the renovations of Morse and Stiles will also incorporate methods of sustainable design.

“It is difficult to obtain LEED ratings of Silver or above on major renovation projects of our older buildings without making significant changes to the building’s entire exterior. For the major renovation projects, including the Colleges, we have installed thermally efficient windows, added insulation to attic spaces, improved lighting and lighting controls systems, and replaced improved inefficient heating systems as much as possible.”

These are the small architectural changes that will contribute to an overall reduction of the campus’s greenhouse gas emissions. Yale has been a leader of American education for centuries, but now it is also assuming the role of a global leader in campus sustainability.

Very quickly, the university has recognized its ability to reduce its contribution to global warming and to serve as a model for other universities. While LEED Platinum certification may not be possible for all future construction projects at Yale, the university as a whole will achieve much more.

About the Author
Nicole Espy is a senior MB&B major in Pierson College and a member of Student Taskforce for Environmental Partnership.

Acknowledgements
Thanks go to Professor James Axley, Patrick Bellew, Haley Gilbert, and Jerry Warren for much of the information. Also thanks go to Mr. Peter Otis for the photos.