The lab of Dr. Alanna Schepartz, Milton Harris ’29 Ph.D. Professor of Chemistry and Professor of Molecular Cellular and Developmental Biology, is changing how researchers study proteins.

The conventional approach has examined a model protein’s structure and its interactions with other macromolecules using an array of biophysical techniques, such as X-ray diffraction and NMR spectroscopy.

Recently, however, Dr. Schepartz’s lab has pioneered research into the design and synthesis of three classes of molecules: miniature proteins, ß-peptide foldamers, and proto-fluorescent probes–“molecules nature chose not to synthesize.”

These synthetic proteins are used both to address current biological questions and to serve as possible therapeutics in the treatment of diseases such as cancer.

Schepartz and her coworkers have established unique strategies in the design and engineering of these three classes of molecules, which have added significantly to the biochemical tools available for manipulating and studying protein interactions inside the cell.

Miniature Proteins – A Lesson in Grafting

Dr. Schepartz and her coworkers began their first foray into the synthesis of miniature proteins in order to address the specific challenge of identifying the functional role of protein-protein and protein-DNA interactions in cells.

In addition, they recognize their protein and nucleic acid targets with high specificity. The applications of mini proteins exploit their ability to mimic the structure of larger proteins. This will ultimately enable researchers to study how particular proteins contribute to disease pathways.

The strategy employed in the design of mini proteins was pioneered by the Schepartz lab and is known as protein grafting (Figure 1).

First, proteins with α-helical residues used for DNA or protein recognition are identified. These residues are cleaved from the original protein and subsequently grafted onto a well-folded, but non-functional protein scaffold.

Protein grafting has been successfully used to create DNA- and protein-binding proteins from the scaffold avian pancreatic polypeptide (aPP), a small, well-folded protein. One research target studied by Schepartz and colleague Jason Chin was the Bcl-2/Bak protein pair.

Bcl-2 is an anti-apoptotic protein that is found in 80% of B-cell lymphomas. Bak is a pro-apoptotic protein, and when bound to Bcl-2, can induce programmed cell death in vitro. Therefore, inhibition of Bcl-2 via protein-binding is a potential strategy for cancer therapy.

These studies were crucial in laying the groundwork for the protein grafting strategy, which would be used in further experiments involving miniature proteins.

Current research on miniature proteins concerns the fate of cell-penetrating peptides (CPPs), small proteins capable of permeating the cell membrane. Scientists have known for a while that positively charged amino acids could facilitate the entry of peptides and proteins into cells.

Recently, Schepartz and Daniels synthesized a CPP vastly more effective at penetrating the cell surface than previous models. Their strategy, as Daniels explained, was to create proteins with positively charged amino acids that retained their original size and structure.

Not only did they succeed in this endeavor, but they created proteins that penetrate cells with a much higher efficiency than natural peptides. The future for miniature proteins holds much promise, and the Schepartz lab has already made staggering contributions to this previously nonexistent field of research.

The second class of molecules that the Schepartz lab specializes in is ß-peptide foldamers, short oligomers of ß3-amino acids. Amino acids in their wild type form are α-amino acids, where both the carboxyl and the amine groups are bound to the same α-carbon (Figure 2).

These foldamers have been shown to overcome the limitations of normal α-carbon proteins: low cell permeability, high proteolytic sensitivity, and poor pharmacokinetics.

In contrast, ß-peptides have favorable pharmacodynamics and the possibility for high cell permeability. Moreover, ß-peptides are invulnerable to proteases since they are non-natural. Lab coworker Daniel Fried explained that the extra methylene group in ß-peptides confers their immunity to proteolytic digestion. The ability of ß-peptides to bind protein targets with high affinity and specificity makes them important therapeutic molecules.

One important barrier to ß-peptide research is the insolubility of such foldamers in water. Hydrogen bonding with water often causes the proteins to develop a dipole, which hinders protein stability.

Using this knowledge, Schepartz was able to demonstrate the strong protein-protein interaction between the designed ß-peptide ß53-1 and the cancer protein hDM2, an anti-apoptotic molecule. By binding to hDM2 in vivo, ß53-1 could potentially inhibit the protein’s down-regulation of the tumor-suppressor protein p53.

Schepartz also conducted another study in which a synthetic ß-peptide inhibited the HIV protein gp41, responsible for mediating cell-cell fusion between the virus and the host. Such landmark studies point to a definite therapeutic role for foldamers in the near future.

A more fundamental question that the Schepartz lab is attempting to tackle centers on why proteins are only found in the α-helical form in nature. In order to answer this question, a study was carried out comparing ß-peptide proteins to α-peptides.

The results of the study showed that ß-peptide foldamers, like natural proteins, were able to assemble into quaternary structure complexes, both in and out of solution.

Furthermore, ß-peptides possessed kinetic and thermodynamic properties similar to those of α-peptides. This discovery of the similarities between ß-peptides and natural proteins will soon enable the synthesis of biomedically relevant foldamers. 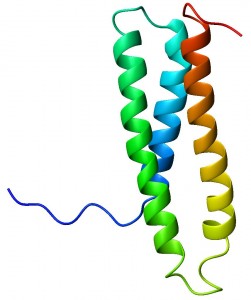 The final class of molecules that the Schepartz lab investigates is proto-fluorescent probes. In general, fluorescent probes have revolutionized the face of cell biology by allowing the visualization of proteins expressed in cell cultures.

Fluorescent proteins (FPs) can be fused at the genetic level to the desired protein. When two proteins expressing FPs come into close contact, their overlapping absorption and emission spectra can be analyzed using Förster resonance energy transfer (FRET).

However, a major problem with the conventional FPs is high steric bulk and slow folding, causing reduced spatial and kinetic resolution of proteins. In order to combat this problem, Schepartz and coworkers came up with an alternate strategy called bipartite tetracysteine display.

The premise behind this approach, as Fried explained, relies on the ability of a common fluorescent dye, such as FlAsH or ReAsH, to recognize a specific sequence in the target protein. Each dye is capable of coordinating four sulfur atoms, or four cysteine residues, as each cysteine contains one sulfur atom.

One advantage of this method was that incorporation of cysteines into the protein was less disruptive than the conventional fusion of FP proteins to the target gene. A second advantage is that FlAsH/ ReAsH binding is reversible, as opposed to FP proteins which are permanently fused to their target.

Next, Schepartz and her colleagues constructed four different proteins (Figure 3). To assess intramolecular binding to fluorescent dyes, they altered the proteins aPP and Zip4 by adding to each two cysteine residues on both ends, resulting in four cysteines per protein.

To assess intermolecular binding to dyes, they added only two cysteines to one end of the proteins GCN4 and Jun. The cysteines mediate dimerization of GCN4 and Jun, enabling the fluorescent dyes to bind to the respective dimers.

For each of the four proteins, they created a counterpart with a point mutation so that the new residue would completely alter the 3-D structure.

Schepartz then decided to evaluate whether FlAsH and ReAsH were able to distinguish between wild type and misfolded (point-mutated) aPP and Zip4 proteins. Indeed, results showed that there was a two- to ten-fold higher emission intensity with the wild-type proteins compared to the misfolded ones.

She then carried out the same experiment on the GCN4 and Jun proteins in order to test the ability of the dyes to distinguish between native and misfolded intermolecular assemblies.

As expected, misfolded proteins were 7- to 20-fold less bright compared to their wild-type counterparts, showing that the dyes have a lower affinity for the structurally compromised proteins.

These preliminary studies have already shown that fluorescent labeling, through the strategy of bipartite tetracysteine display, can be a useful tool in the detection of protein conformations.

Since protein misfolding is a hallmark of many diseases, such as Alzheimer’s and Parkinson’s, this strategy may ultimately be used in early screening for such diseases.

Also, bipartite tetracysteine display should be compatible with other fluorescent applications, allowing for high resolution of protein-protein complexes. The possibilities of this technique are only beginning to be explored, and the future of proto-fluorescent probes looks bright.

The Future of Synthetic Proteins

So what’s next in the world of synthetic proteins? Daniels explained that future projects will seek to demonstrate the utility of CPP mini proteins. These studies will involve examining the biological stability of such proteins, and whether they elicit an immune response.

As for foldamers, Schepartz predicts that it may eventually be possible to generate ß-peptide ligands for 75% of the human proteome currently considered “undruggable.” If this proves to be true, foldamers would present a much more efficacious and cost-effective alternative to current α-peptide based drugs that are expensive to produce.

Lastly, Fried explained that fluorescent probes will be used to explore questions in Alzheimer’s disease and cancer. Regarding long term applications of synthetic proteins, Daniels speculated that “In the future, I think we can expect to see them representing a major share of commercial therapeutics.”

About the Author
Vikram Jairam is a junior in Morse College majoring in Biology. He hopes to someday create a protein and name it after himself.

Acknowledgments
The author would like to thank Dr. Doug Daniels, Daniel Fried, and Abby Hodges for patiently answering his questions and unraveling the mystery behind synthetic peptides.