Determining the Effects of desPLEX 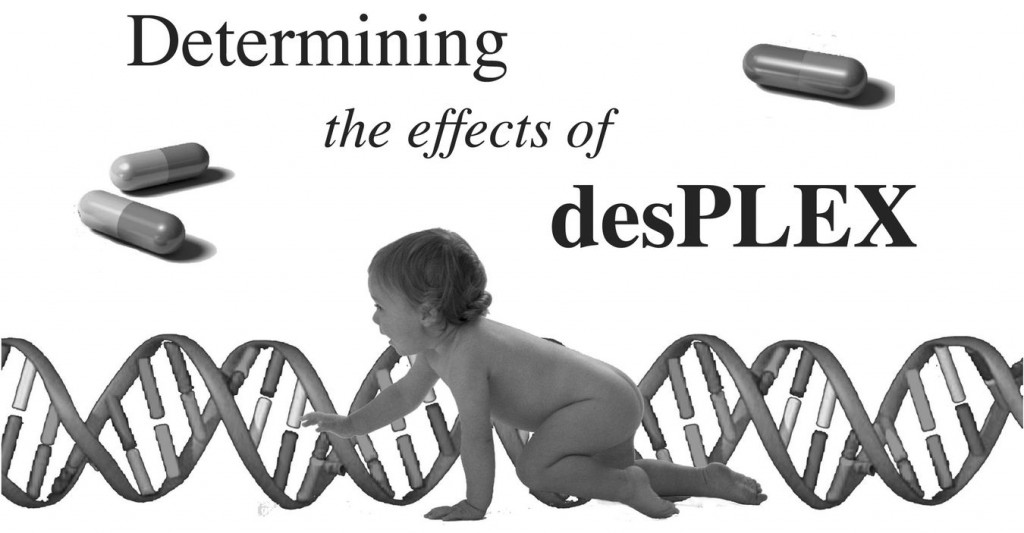 “Yes! desPLEX to prevent abortion miscarriage and premature labor. Recommended for routine prophylaxis in ALL pregnancies!  Ninety-six percent live delivery with desPLEX in one series of 1200 patients – bigger and stronger babies, too. No gastric or other side effects with desPLEX – in either high or low dosage.”

This convincing sales pitch appeared in 1957, right in the middle of the thirty-three year period between 1938 and 1971 during which diethylstilbestrol (DES) was prescribed regularly under the brand names Estrosyn, Palestrol, Domestrol, and more.

A synthetic estrogen, DES was given to expectant mothers in doses up to 125 mg. However, it was anything but the miracle pill it appeared to be: the approximately 5-10 million mothers and female fetuses who were exposed to DES suffered several unforeseen and inexplicable consequences.

However, scientists working under Hugh Taylor, a professor in the Department of Obstetrics, Gynecology & Reproductive Science and the section chief of Reproductive Endocrinology and Infertility at Yale School of Medicine, have come one step closer to elucidating the science behind the dangerous side effects of DES.

Finally, we may understand why it is that estrogens like beta 17 estradiol are naturally high during pregnancy, but that exposure to synthetic estrogens (such as Bisphenol A) found in common household plastics even today, can lead to such devastating results.

The importance of HOXA

In the initial experiments, 30 female mice were exposed to DES, and the DNA from their pups was extracted.  DES was found to affect HOX genes, which are important in coding information about the position of body structures relative to each other during embryonic development.

These genes are so crucial, in fact, that abnormal HOX expression in Drosophila melanogaster fruit flies can result in deformities as severe as legs growing out of the head.  “We found that HOXA 10 protein expression was shifted to the bottom portion of the uterus in the female offspring,” Professor Taylor explains.

This HOXA 10 protein, expressed during the embryonic development of female fetuses, is expressed in the area that comprises the Mullerian or paramesonephric ducts. These ducts eventually develop into the female reproductive organs including part of the vagina near the uterus, the fallopian tubes, and the uterus.

A critical shift in region of expression of HOXA 10, such as that caused by DES, spells catastrophe to the proper differentiation of these ducts, causing female reproductive tract deformities so severe that they may cause infertility.  In other words, the uterus is just so badly formed that it has trouble supporting a pregnancy.

These deformities are evident when comparing pictures of reproductive organs from DES daughters versus those from normal females. The uterus of normal females normally widens at the top and narrows at the bottom to form an upside-down triangular shape.

However, that of DES daughters is observed to be shaped like a capital T, with no widening towards the top. Furthermore, the cervix of a DES daughter has a ‘hood’ or a collar’, whereas that of a normal female does not. DES daughters also have vaginal adenosis as a result of abnormal tissue on the surface of the vagina; this results in excess mucous production in the vagina, reminiscent of an infection.

Cervical changes in DES daughters may include the presentation of septae or the cockscomb cervix (the appearance of firm ridges in the epithelial tissue). These reproductive organ deformities also lead to higher rates of ectopic or tubal pregnancies, when the fertilized egg implants in a place other than the uterus.

Even with all these problems, it is important to note that not every deformity leads to infertility. Some deformities, like vaginal adenosis, have little impact upon fertility, while others, such as uterine malformation, can result in increased rates of miscarriage and ectopic pregnancy.

In addition to Taylor’s first discovery of a change in region of HOXA 10 expression, he found “increased amounts of the enzyme responsible for changes in the DNA. Rather than just changing how much of the protein is there, DES is actually changing the structure of the HOXA 10 gene.”

To boot, the persistence of these changes in the HOXA 10 gene can be explained by ‘imprinting,’ a process by which genetic alterations at the embryonic phase of life are carried through into adulthood.

Since these monumental discoveries, the team has been working to elucidate DES’s mode of action. In order to find out which part of the gene was responsive to estrogen, the team first conducted a luciferase assay.

The luciferase assay takes advantage of the natural fluorescence genes coded in the DNA of fireflies and in the DNA of renilla jellyfish.  The light-emitting product “reports” the transcriptional activity of a promotor located upstream: the more powerful the fluorescence signal, as measured by a luminometer, the higher the transcriptional activity of the promotor.

For this assay, Ishikawa cells (a human uterine endometrial carcinoma cell line in which HOX genes are known to be regulated by estrogens) were made to uptake DNA by a process called transient transfection (in this case, liposome-mediated transfection).

The DNA that was incorporated into the Ishikawa cells included segments found upstream of the transcription start site for HOXA 10, a region likely to contain the regulatory element for HOXA 10 that responds to natural estrogens such as estradiol and synthetic ones such as DES.

The first of these two segments showed a stronger fluorescence signal than the other. To correct for differences in transfection efficiency from cell sample to cell sample, the team made sure to divide firefly luciferase reporter gene activity values by renilla luciferase internal control vector activity values.

EMSA uses an electric current to separate molecules of Ishikawa cell nuclear extract, thus detecting binding of estradiol to an estrogen response element.  If binding has occurred, then the complex would be larger and heavier, so it would not be propelled as far by the electric current as the two unbound.

The answer was soon found in the fact that that the Estrogen Response Element 1 response to estradiol was four to seven times greater than its response to DES when the two drugs were given at equal concentrations.

This ligand-specific inducibility seems to be the key to DES’s ability to modulate HOXA 10 expression: if the Estrogen Response Element 1 responds differently to DES than to estradiol, then it is no surprise that the two estrogens can cause massively different results.

For now, the story is as follows: DES modulates HOXA 10 expression, causing the Mullerian ducts to lose their segmental identity, which leads to improper differentiation during the embryonic phase of life, and infertility in the sexually mature adult female.

“These findings bring us closer to understanding the way in which DES interacts with the developing reproductive system,” Taylor concluded.

While this new knowledge offers little consolation to those exposed to the teratogen-carcinogen, perhaps it will provide a new basis for the study of the relationship between estrogens and female reproductive tract development.  Most importantly, it will prevent anything similar to the massive teratogen exposure of the twentieth century from ever happening during the twenty-first.

About the Author
KAVITA MISTRY is a sophomore in Berkeley College. Besides working on the Yale Scientific Magazine staff , she is also a Science Tourguide for the Office of Undergraduate Admissions.

Acknowledgements
The author would like to thank Dr. Hugh Taylor.