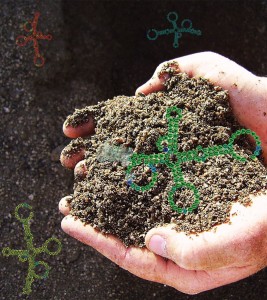 When Francis Crick described his Central Dogma of molecular biology in 1958, the scientific world entered a new phase of understanding genetic regulation. Scientists realized that DNA and RNA are the hereditary genetic material used to form proteins.

In Crick’s dogma of DNA makes RNA makes protein, RNA was positioned as an intermediate step. In contrast, proteins – as complex and lengthy molecules – were believed to be the primary regulators of gene expression and most of the intercel­lular interactions.

However, a great deal of research within recent years has shown that RNA molecules too are capable of remarkable interactions within the cell. For instance, RNA has been shown to assist in the regulation of gene expression, protein production, and enzymatic reactions.

In 2002, Ronald Breaker, Henry Ford II professor and incoming department chair of Molecular, Cellular, and Developmental Biology, discovered riboswitches, which are portions of RNA that bind to DNA and control the activity of genes. This advance­ment brought us further away from the Central Dogma and closer to the concep­tion of an RNA World.

A riboswitch is divided into two parts: an aptamer and an expression platform. The aptamer binds to a small target molecule, forming a metabolite, and this induces the expression platform to change structurally. In turn, this structural change can cause a gene to turn on or off through several mechanisms.

In one method, a ribozyme within the riboswitch could cleave itself when the expression platform binds to the small target molecule. This causes the riboswitch to fold such that the ribosome-binding site is blocked for translation.

A second method involves intrinsic termination. In this instance, the mRNA molecule – containing the riboswitch – has a stem-loop structure rich in cytosine-gua­nine base pairs followed by a chain of uracil residues. RNA polymerase binds tightly to the stem-loop, causing transcription to stall. The interaction between DNA and mRNA is weakened at the uracil chain due to weak adenine-uracil bonds, causing the complex to dissociate. Within the cell, riboswitches are most often used to regulate genes that make amino acids.

When Breaker started this research, he set out to test the RNA World hypothesis. This hypothesis states that early in the Earth’s history, life survived using only RNA that performed functions later taken up by DNA and proteins.

Breaker understood that in order for the RNA World hypothesis to be true, the RNA had to be able to sense its surroundings. However, a clear mechanism for this was not known.

His research began with experiments using test tube evolution to discover ribo­switches. The work began with the ham­merhead ribozyme, an RNA motif that is a catalyst in self-cleavage reactions. Breaker then removed a portion of this ribozyme and inserted a random sequence. This new RNA molecule was tested for binding and self-cleavage capabilities. Those new mol­ecules that showed the desired capabilities underwent further testing to determine if they were indeed riboswitches.

Still, where are the riboswitches in humans? Breaker believes that beyond the numerous riboswitches yet to be discovered in other genomes, riboswitches do prevail in the human genome. However, humans have a thousand times more genetic mate­rial than bacteria. Humans are also more wasteful in energy, and they make RNA more freely. For these reasons, discovering riboswitches in humans is logistically very difficult.

Yet some scientists believe that we have not discovered these riboswitches in humans because they do not exist. Ribo­switches, they claim, are too primitive to play a role in complex human genome. This camp of researchers believes that riboswitches became lost along the evolu­tionary line.

However, evidence from the labora­tory challenges this notion. Namely, the riboswitches found so far are functionally complicated, capable of carrying out intri­cate processes. In addition, research has suggested that riboswitches are among the oldest genetic regulatory systems. Thus, one reasonable possibility is that riboswitches in humans exist but are different in appear­ance from other RNA molecules and per­haps even hidden among them.

So far, riboswitches have been shown to regulate a wide variety of genetic processes. Among these, one of the most crucial is the biosynthesis of vitamins. Vitamins function as hormones and antioxidants, assist in the signal transduction pathway, regulate cell growth and differentiation, and act as coenzymes in numerous reactions with the cell. Additionally, many vitamin derivatives are used to regulate riboswitches. Regula­tion of the delicate balance between ribo­switches and vitamins is very important for the body’s functioning as a whole.

The Breaker lab also works closely with the laboratory of Scott Strobel, Professor of Biochemistry and Biophys­ics. While Breaker focuses mainly on the discovery and validation of riboswitches, Strobel concentrates on solving the three-dimensional structure of the riboswitch and understanding its mechanism on an atomic level.

For his work, Breaker considers himself a Molecular Archaeologist. He explained: “We can crack open cells and look at their components in order to understand their mechanism.”

As a self-named Molecular Archaeolo­gist, Breaker has created a new classifica­tion of molecules for genetic regulation.His research has shown RNA to be more of a functional molecule than ever thought before, transforming and expanding our understanding of the molecule’s place in the Central Dogma.

About the Author
MELISSA STONE is a junior in Davenport College. She is a Molecular, Cellular and Developmental biology major.

Acknowledgements
The author would like to thank Professor Ronald Breaker for his generosity in explaining his research, his great enthusiasm for riboswitches, and his pioneering work as a Molecular Archaeologist.