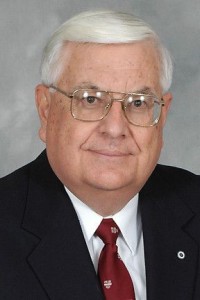 James “Jim” Baird, ES ’63, Professor of Chemistry and Adjunct Professor of Physics at the University of Alabama in Huntsville, has been interested in the sciences since childhood.

The son of a medical doctor and high school Latin teacher, Baird was exposed to the worlds of science and academia from an early age. Yet it was not until he received a chemistry set from his parents in eighth grade that he truly began pursuing his passion for chemistry.

By the time Baird completed high school, he already had many experiences in the sciences – so much, in fact, that Baird knew he would want to major in chemistry someday. Yale not only provided Baird with the opportunity to pursue chemistry in greater depth, but it also allowed him to foster an interest in physics.

As an undergraduate, Baird once learned about s, p, d, f orbitals in both his chemistry and physics classes on the same day. This made him realize the close relationship between physics and chem­istry and that he could combine the two fields. Baird recalls that though he had always possessed “curiosity about physics in high school,” it was “that experience that made [him] more serious about pursuing physics.”

Immediately upon graduation, Baird was an Army Reserve second lieutenant from 1963 to 1968. However, he was deferred from active duty since he was pursuing an advanced degree. After earning his Master of Arts (MA) in physics at Harvard in 1965, Baird continued with Ph.D. work in chemical physics at Harvard, searching for a neutron electric dipole moment with his disserta­tion advisor, Norman F. Ramsey, who won the 1989 Nobel Prize in Physics. As nuclear reactors were necessary for the research to progress, Baird was often sent to work at the Oak Ridge National Laboratory in Tennessee.

After completing his Ph.D. dissertation, Baird was called to active duty with the Army. His ultimate duty assignment was to the Test Command Defense Atomic Support Agency at Sandia Base in Albuquerque, New Mexico. The mission of Test Command was to support the U.S. program in underground nuclear weapons effects testing at the Nevada Test Site.

Baird returned to the Oak Ridge National Laboratory as a research physicist in 1970. There, he worked on defense research in relation to electromagnetic pulses associated with nuclear weapon explosions in the upper atmosphere. Baird then turned to research in radiation chemistry, which he pursued until 1981, when he became manager of the Radiochemistry Unit of the General Electric Knolls Atomic Power Labora­tory in Schenectady, NY.

In 1982, Baird became the chairman of the Department of Chemistry at the University of Alabama in Huntsville while also involved in NASA-sponsored research on shock waves, atomic and molecular diffusion in liquids and solids, protein crystal growth, and many other topics. Moreover, in 1997-1998 and in 2007, Baird taught Chemistry 114 at Yale as a visiting professor during his sabbaticals.

Today, Baird teaches an undergraduate physical chemistry course and a gradu­ate school chemical electrodynamics course at the University of Alabama in Huntsville, and his current research is on the coupling between critical points and chemical reactions. What Baird finds most rewarding about his job as a profes­sor and as a researcher is being able to “share the ‘Aha!’ moment when students understand the meaning behind the formulas and are able to draw scientific conclusions that are decisive.” He added, “To see the scientific method work and reveal things is a thrill.”

Nevertheless, Baird “always fulfills [his] teaching preparation first every day and turns to his research second,” crediting his interactions with Yale professors during his undergraduate years in providing the foundation for this belief. To him, Yale “changed [his] life entirely for the better.”

Baird believes that “the mark of a professional is to be able to get an answer and know that it is the right answer. After all, pro­fessionals are hired to do things for people who otherwise would be unable to do these jobs for themselves.” Indeed, Jim Baird has certainly shown his ability to contribute many answers to society through both research and teaching.