How can you cut a diamond? 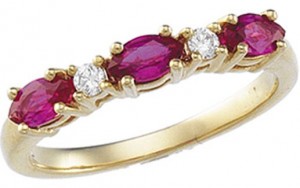 “Pear Cut,” “Marquise Cut,” “Princess Cut” (Zales)—the pro­gression of cleaving, cutting, and shaping a diamond has been developed and refined with improved technologies since the first polishing of a diamond’s facets during the Middle Ages. Before that time, diamonds were used only in their natural octahedral state due to difficulty in cutting. So why are diamonds so hard to cut?

The difficulty in cutting a diamond comes from its molecular composition and structure. A diamond is a pure, or nearly pure, extremely hard form of carbon that has naturally crystallized in the isometric system. Carbon atoms are stacked in a rigid three-dimensional framework and formed under high pressure and intense heat. This results in an extremely hard substance, a ten on the Mohs scale of mineral hardness.

The hardness of the diamond prevents arbitrary cleaving; instead, the shape of a diamond cut is related to the natural shape of the rough stone. Diamonds naturally occur in a range of forms, from nearly faultless crystals to dark, nodular lumps. Each of these forms is valuable, either as gems or as grinding and cutting grit.

Using these imperfect stones as cutting grit belies the main theory: only a diamond can truly cut another diamond. Diamonds are cut with specialized tools that make use of diamond tipped phosphor bronze or diamond dusted steel blades. Such tools are used to exploit the structural weakness of the diamond by groov­ing and striking along specific tetrahedral planes. Diamond dust-charged cast iron disks revolve around the rough cut, polishing facets and creating its brilliant, symmetrical shape.

The cut of a diamond has the greatest influence on the dia­mond’s perceived beauty, as the angle of its facets directly relates to its ability to refract light, known as “light performance,” or brilliance. Thus, each jewelry company has developed high-tech equipment for analyzing its compounds, facet angles, and index of brilliance to attract consumers. Slogans such as Zales’ “Four C’s—color, clarity, cut, carat” begin to enlighten the consumer, lending a scientific analysis to this modern symbol of love.