How I Killed Pluto 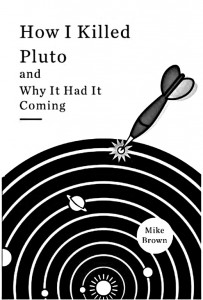 The next day, headlines from around the world rung out heralding the demise of poor, poor, Pluto. But why? What happened? What did Pluto ever do to deserve such a fate?

In his fascinating book, How I Killed Pluto and Why It Had It Coming, Caltech astronomer Mike Brown sheds light on the root causes of Pluto’s death: his exploration of the Kuiper Belt and discovery of the dwarf planet Eris. Part autobiography and part scientific exposition, Brown tactfully interweaves the science behind Pluto’s demise within the story of his own life.

In the late 1990s, student Mike Brown was not set on killing planets. In fact, he was not even interested in planets – he was busy exploring the volcanoes of Io, one of Jupiter’s four Galilean moons. Back then, he was content with the nine-planet system, content that all there was to be found had already been found.

Then he heard of the Kuiper Belt. Discovered in 1992, this massive belt of frozen asteroids and lonely rocks beyond Neptune convinced him “that astronomers had been wrong: they didn’t know everything; there were things still to be found at the edge of our own solar system.” By 1999, with over 500 new trans-Neptunian objects (TNOs) discovered in this belt, Brown was confident that “astronomers were on an unstoppable march that would eventually lead to a tenth planet.” And so his search began. But little did he know that his quest to discover the tenth planet would lead to the destruction of the ninth.

The search was by no means a simple task. It took years of scrutinizing thousands of pictures of the sky, years of finding “almosts,” years of excitement and disappointment, until he found Eris, the first TNO larger than Pluto and what nearly became the tenth planet. Despite the tedious research process, these were times of discovery, change, and controversy for Brown. Between 1997 and 2006, Brown discovered, named, and explored many TNOs almost as big as Pluto, got married, had a daughter, Lilah, and even had a TNO nearly stolen by a Spanish astronomer. These events make up the bulk of the book and are what make it so delightfully relatable. Yet, these same digressions can, at times, overpower Pluto, tipping the delicate balance away from exposition and more towards autobiography. While suitable for most, this risks leaving more sophisticated readers wanting more.

Nonetheless, his seminal discovery of Eris precipitated the death of Pluto. As the first TNO larger than Pluto, it forced the IAU to precisely define the term “planet,” which originally was named after the Greek word for “wandering star.” The definition, however, has changed with time and so has our understanding of our solar system. As technology advanced, new planets were added, such as Uranus and Pluto, and old “planets” were taken away. Ever heard of Ceres and Pallas? They were the original 9th and 10th planets but are now considered “asteroids,” a term coined in 1802.

And so by 2006, with the discovery of Eris, another reclassification was long overdue to deal with Pluto. Simply put, Pluto is not like the other planets. It is tiny – not even a fifth of the size of our moon. It is far, far away – around 49 times further from the sun than the Earth. Pluto does not even have a normal orbit; it is inclined 17˚ above the ecliptic plane. Yet, it is not unique. Far from being the oddball planet of our galaxy, Pluto is like many other entities in the Kuiper Belt.

Nevertheless, to many, Pluto was special. And in many respects, it still is. For the seventy-six years that Pluto was a part of our solar system, it was the sympathetic oddball, the little planet that could. That was what made the IAU’s ruling so controversial. But, despite a last ditch attempt by “pro-Pluto” astronomers to save the planet, its fate was sealed as scientific objectivity overpowered sentimentalist urges.

While it still seems cruel to have erased Pluto, reading the story behind its demise does wonders to not only satisfy a basic curiosity but also comfort what many feel to be the loss of an old friend. That is what lies at the core of Brown’s book: a quick, charming read that explains why Pluto is now a “dwarf planet.”