“On Mount Vesuvius, broad sheets of fire and leaping flames blazed at several points, their bright glare emphasized by the darkness of night.” – Pliny the Younger’s account of Mount Vesuvius and the destruction of Pompeii, 79 AD.

For centuries, volcanoes have been an incomprehensible natural phenomenon. To further our understanding of unexplained eruptions, Dr. Bercovici of Yale’s Geology and Geophysics Department studies volcano behavior and recently proposed a new predictive model that describes a mechanism called magma wagging that occurs just before a volcano erupts.

There are three major types of volcanoes: scoria cone, shield volcano, and stratovolcano, which have eruption types of Strombolian, Hawaiian, and Plinian, respectively. The most dangerous of these classified volcanoes is the Plinian, the type of volcano that famously buried Pompeii. These volcanoes have an explosive column of lava that typically reaches 45 km.

For each of these volcano types, plate tectonics are an integral part of why volcanoes erupt. The majority of volcanoes occur in subduction zones, an area where the sea floor sinks below the Earth’s mantle. As slabs of the sea floor’s rock drag down wet sediment, the sediment is shoved into the mantle akin to “dropping ice cubes in the mantle,” according to Bercovici. The heat of the mantle melts the rock, which bubbles out of the volcanic column. As it passes through the column, it melts other rocks and creates a viscous paste. This paste gets stuck in the column and increases the pressure of the column. When the pressure reaches a certain threshold, the volcano erupts and breaks the rock surrounding the column. Ash and sulfate are blasted from the volcano and enter the surrounding air, creating an atmosphere that may endanger the health of nearby plants and animals. 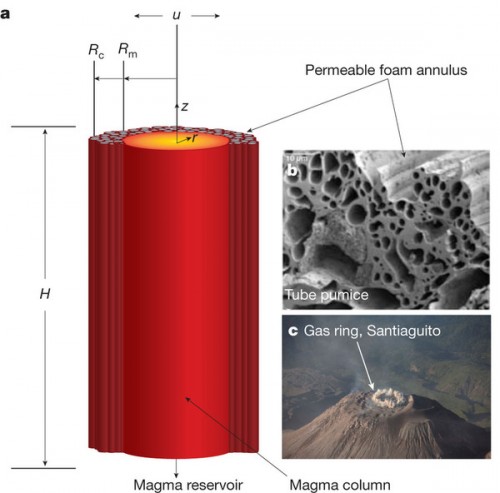 Volcanic tremors occur before the eruption of a volcano and may last for a few minutes or several days. The tremors are defined by a low frequency shaking, about 0.5 to 5 hertz, that is approximately the same despite the size or location of the volcano. The universality of this tremor frequency was puzzling to geologists, who sought to create mathematical models that could predict volcanic eruptions.

The model created by Bercovici explains these low frequency tremors by studying magma wagging in the magma-conduit system. This system encompasses a column of magma and a surrounding area of gas. Magma consists of a mixture of viscous rock melt, crystals and bubbles. As it rises within the walls of the conduit, the edges of the column develop into a thin, permeable annulus that surrounds the central magma column. The permeability of the annulus allows it to transport gas into the surrounding space.

Magma wagging occurs when magma is pushed up through the conduit construct in the center of the volcano. A layer of gas develops between the conduit and the rock of the volcano, and magma comes out of the conduit, causing the magma column to shake within the gas layer. The shaking and lateral movement of the column is countered by the spongy, springy foam of the annulus, which returns the column to its original position, causing oscillation described as “wagging.” The pressure changes within the annulus are transmitted to the walls of the magma-conduit system, which leads to an observable tremor.

Bercovici developed a mathematical equation to describe the oscillatory magma wagging phenomenon. Bercovici’s equation shows that the frequency of the magma wagging is only weakly dependent on the size of the volcano. This explains why all volcanoes have frequencies close to 1 hertz and little frequency variation is observed across volcanoes.

The model designed by Bercovici explains the mechanism for volcanic tremors, but it is difficult to apply this model to accurately predict eruptions. Eruption depends on many properties and environmental circumstances, complicated by our inability to observe the inside of volcanoes. However, it is possible to observe the change in tremor frequencies as volcanoes approach eruption, which allows some forecasting of volcanic behavior.

To determine their predictive accuracy, volcano models are tested using supercomputers that simulate volcanic eruptions. Ultimately, scientists hope that the magma wagging model performs well in supercomputer modeling trials. Bertovici notes, however, that while theoretical modeling can be helpful, “nothing can compare to empirical data.”

Data from past volcanic eruptions may serve as guidelines for judging the impact of volcanoes in the future. For example, the tremor frequency and amplitude may reveal the amount of damage a volcano’s eruption will cause. Although predicting volcano behavior remains imperfect, models such as Bercovici’s bring us closer to understanding the incredibly powerful natural phenomenon of volcanic eruptions.

About the Author:
Theresa Oei is a sophomore Molecular Biophysics and Biochemistry major in Pierson college. She is on the board of Synapse, Yale Scientific Magazine’s Outreach Program, and works in Professor Steitz’s lab studying target genes of the viral miRNAs HSUR4 and HSUR5 for their role in tumorigenesis.

Acknowledgements:
The author would like to thank Doctor Bercovici for his time and consideration in describing his research in geological development.