The Fa(c)t of the Matter: How Fat Cells Regenerate — In a Good Way

Ever wonder why skin tends to thin and break more easily as people age? How about whether hair grows back differently depending on if you shaved or removed it? If you never thought these two phenomena were connected, you are in good company. Researchers at Yale were investigating the effects of PDGFA—a protein involved in cellular signaling, growth and division—on the growth cycles of hair follicles, when they discovered that a subpopulation of, adipocyte stem cells, stem cells derived from fat cells,, were important for both hair cycling and aging. The study, published in December, explored the molecular mechanism behind the maintenance and expansion of dermal white adipose tissue, which stores fat cells in the skin’s dermis, and how this process is affected by serial hair removal and aging. Their findings expand the scientific community’s understanding of adipose tissue and point to several clinical and cosmetic applications.

Getting the Fa(c)ts Straight

In order to grow, tissues need to maintain small groups of stem cells, and fat cells are no exception. The stem cells for fat tissues exist in storage sites called depots and can be regulated through a variety of mechanisms, but very little is known about how these cells are maintained or what signals activate them to grow and become mature, fully functioning fat cells in a process known as differentiation.

In 2012, a paper by Matthew Rodeheffer, one of the Yale researchers on the team, illustrated that fat stem cells expressing a cell-surface protein called CD24 commit to becoming fat cells when they stop expressing that protein. The Yale team decided to build on Rodeheffer’s finding, focusing on how another protein regulates the differentiation of these CD24-expressing fat stem cells. They choose to study PDFGA because it was expressed in fat cell precursor cells and was known to be important for stem cells in other systems. They specifically investigated how PDFGA regulates cell differentiation in the white adipose tissue located in the dermis of the skin because these cells showed rapid turnover, and the research team could observe cell growth and regression in mere days.

In their study, the team investigated expansion, a process that increases the area occupied by fat cells. Their previous work had shown that expansion occurs during hair growth and is preceded by the proliferation of fat stem cells expressing CD24. Thus, they predicted that there was a potential link between the processes of fat stem cell proliferation and hair growth. Supporting this prediction, they found that hair removal affected CD24-expressing fat stem cells. Waxing the mice in consecutive rounds led to a loss of fat area and fat cell numbers. The researchers also wanted to investigate how aging affected these processes: they found that 50% of CD24-expressing fat stem cells were lost during the aging process. 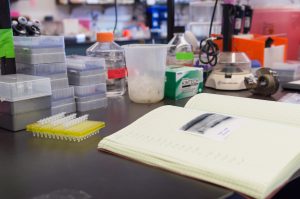 Working with these mice, the group established that PDGFA was responsible for maintaining dermal white adipose tissue mass and fat stem cells. Fat stem cells expressed higher levels of PDGFA as they proliferated and lower levels as they aged. Furthermore, when they deleted the gene coding for PDGFA in the dermis of the skin, the expansion area of the depot decreased during hair growth. The rate of expansion was not slowed, however, since a related gene, PDGFB, was over-expressed in other cells to compensate for the lack of the protein in the fat stem cells.

Interestingly, only the fat stem cells in the dermis that expressed CD24 seemed to be affected by changes in PDFGA levels. Fat stem cells that did not express CD24 were unaffected by the deletion of the PDGFA-encoding gene, and no changes were observed in adipose depots that were not in the dermis.

Once the researchers identified PDGFA as a key player in the maintenance and growth of CD24-expressing fat stem cells, the next step was to understand exactly what role it played in these processes. Using a program called Ingenuity Pathway Analysis (IPA), which analyzes gene expression data to highlight key interaction networks, the researchers sequenced the RNA of fat cell precursors that had been treated with PDGFA to identify pathways correlated with the protein. The data highlighted significant changes in pathways involved in proliferation, differentiation, and survival—indicating that PDGFA is significant in these processes; in particular, their results implicated two pathways called PI3K/AKT and MAPK.

The PI3K/AKT pathway is a signaling pathway involved in cell proliferation, growth, and metabolism. The research team’s data indicated that the pathway could be activated by PDGFA in mesenchymal cells, stem cells that eventually differentiate into connective tissue cells., They found that an increase of PDGFA in treated cells correlated with an increase in phosphorylated AKT—the major signaling molecule involved in this pathway. Further indicating a connection, the researchers found that inhibition of the PI3K/AKT pathway negated the effects of PDGFA treatment, and deleting genes that encoded AKT2, a protein in the pathway, reduced the area of the dermal white adipose tissue in later stages of hair growth. As with the previous experiments, these effects were restricted to CD24-expressing fat stem cells.

So why is this one little molecular mechanism important beyond its role in hair growth? First of all, dermal white adipose tissue has been shown to play a role in several important bodily functions, including wound healing, responses to infection, and thermal regulation. As such, understanding the mechanisms by which adipogenesis occurs may help us identify how defects in the molecular pathways contribute to diseases such as skin disorders or immune response malfunctions.

According to Guillermo Rivera Gonzalez, lead author on the paper, one future direction for the team is to investigate how mature fat cells communicate with the immune system to affect the immune response. In particular, he would like to examine the interaction between the immune system and adipose tissue in wound healing. Research on this interaction could have important implications for improving the body’s capacity to heal. 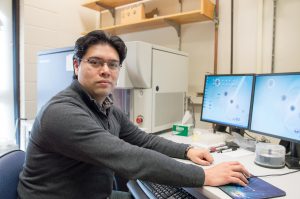 Another of the important functions of dermal white adipose tissue is to maintain skin integrity over time. As PDGFA levels decrease with age, the pool of CD24-expressing fat stem cells is also depleted, slowing the rate at which new fat cells are generated. As a result, aged skin is extremely thin and fragile and loses elasticity, one of the reasons why human skin wrinkles and becomes easily broken with age. Thus, a better understanding of the mechanisms involved in maintaining skin integrity could potentially improve skincare later in life. “If we can improve maintenance of adipose tissue in aging, we could increase the strength of the skin and it would be more resistant to mechanical stretch that could break the skin,” says Rivera Gonzalez.

Furthermore, as PDGFA has been shown to be involved in regulating stem cells of other tissues, its role in other types of adipose stem cells outside of dermal white adipose tissue can be further explored. “We may be able to maintain fat in aged skin using PDGFA, or PDGFA may regulate adipose stem cells in other tissues,” said Horsley, the principal investigator on the paper. As the full processes of fat cell maturation have only recently begun to be understood, there is a lot of potential for future exploration into the many applications of adipose tissue maintenance, from cosmetics to old age.

Given the role of adipose tissue in countless bodily processes, understanding the signaling pathways involved in its functioning is critically important. This study has provided one of the first insights into how adipocyte stem cells are maintained in the skin, or in any other depot of adipose tissue. The future seems bright in this area of study, and hopefully future studies will further clarify this relatively unknown but promising biological pathway.

About the Author: Jessica Schmerler is a senior in Jonathan Edwards College majoring in molecular, cellular & developmental biology, neuroscience track. She is a member of the Yale Journalism Initiative, a freelance writer for Scientific American MIND magazine, and Editor-in-Chief of the Yale Global Health Review. She also works in William Cafferty’s lab studying spinal cord injury.

Acknowledgements: The author would like to thank Drs. Rivera Gonzalez and Horsley for their time and enthusiasm about their research.