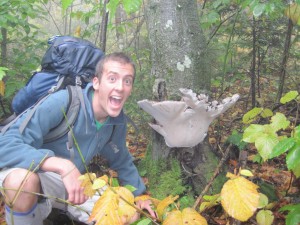 “Pre-med? Never! I was pre-plant for a little bit, but now I’m thinking pre-fungus.”

Trumbull College junior and Molecular, Cellular and Developmental major Jon Russell is serious about growth. To hear him discussing his work with fungi in the lab of Molecular Biophysics and Biochemistry Professor Scott Strobel, it is as if it were as exciting for him as the most recent blockbuster film, and to actually believe him is a growing process in itself.

At the end of a conversation with this passionate researcher-in-training, though, it is hard not to be convinced of his dedication to the field of plant and fungal biology. His longtime friends say the same. Christopher Brown, DC 2011, notes, “I have never met someone who has such a visible spark of passion.” Clearly, the enthusiasm with which Russell has approached his Yale career is infectious.

How did Russell, a transplant from the forests of Scarborough, Maine, grow into his role here at Yale? The foundation was already there: by the end of his high school career, Russell was teaching plant biology to his high school classmates – and loving every minute of it. In what he describes as the most “impactful” experience of his high school career, his teacher – recognizing his passion and wanting to put it to use – allowed him to teach the plant sections of biology classes to his peers. His favorite memories of those classes involve the plant jokes he told – the ones that were laughed at, at least. Russell continued his involvement in growth to other high school endeavors. For example, he received a grant to build a Bio-Fuel Bus with his school’s environmental club.

Various research projects taken on by Russell over the next few years culminated in a trip to Ecuador with the MB&B Department’s Rainforest Expedition class. Under the guidance of Strobel, Russell developed an independent project designed to find endophytic fungi, which are able to survive within plants themselves, in the rainforests of Ecuador. The ultimate goal was to find a fungus that would digest the “notoriously stubborn” Styrofoam.

In the past, fungi have failed to eat up the polystyrene material that composes Styrofoam, and not even bacteria have been very effective. Yet Russell’s hope is that his trip to Ecuador provided him with crucial diversity of the endophytes needed to exhibit Styrofoam-digesting properties. The implication is that Russell might be on the trail to ameliorating a growing waste problem facing future generations.

Yet Russell does not only want to eliminate waste for future generations. His main professional goal is to pass on to future students the experiences that he has accumulated. He can imagine himself being – in fact, even aspires to be – that “wacky science professor walking around with his shirt un-tucked muttering about the biochemical pathways of fungi.”

For now, though, Russell will have to content himself with being the typical Yale undergraduate overachiever (Beckman scholar, club swim team captain, FOOT leader, tree-watcher), but one who has fallen into his roles here naturally. It’s all part of the growth process, after all.