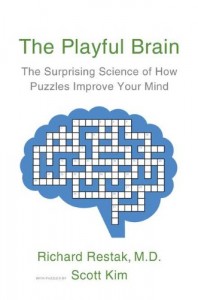 Sudoku took the world by storm in 2005, after retired judge Wayne Gould developed a computer program to mass-produce these puzzles. Many major newspapers even published articles calling Sudoku a cultural phenomenon. Experts attribute the recent rise in popularity of puzzles and “brain exercise” games like Nintendo’s Brain Age to people’s desire to be sharper, richer thinkers. The reality is that people in modern society want to be smarter. Neuroscientist Richard Restak and “puzzle master” Scott Kim provide a means to do just that with their new book, The Playful Brain: The Surprising Science of how Puzzles Improve Your Mind.

Restak sought to create a puzzle book that lays out the science of improving your brain alongside the very puzzles that you can do to exercise your brain because he believes puzzles do indeed improve brain function and even ward off mental deterioration. To pursue this project, he worked with Kim, also named the “Escher of the Alphabet” by Isaac Asimov, to produce this book. Their goal is to help readers maximize brain function and thus develop “cognitive complexity,” a psychology term meaning richer, nuanced perceptions, longer-lasting memories, and more apt responses to questions and challenges.

The format that Restak and Kim chose for their book works wonderfully. Every chapter opens with a discussion of how the brain works, including a clear discussion of pertinent neuroscience studies accessible to the layperson. Anecdotes and exercises follow immediately to demonstrate the neuroscience concepts, thus guiding readers to understand just how their brains work.

While the puzzles in the book are not the most challenging (for example, analogies and 20 Questions were suggested puzzles/games for the chapter on “Thinking in Words”), they serve a significant purpose in the book, however simple they may seem. The point of the puzzles is to illustrate neuroscience topics in an accessible manner so that all readers can enjoy them.

To this end, Restak and Kim accomplish exactly what they set out to do: their book successfully increases readers’ consciousness of how their brain works and elucidates the many different faculties humans use to reason and think about their world. Arguably, this is the first step in becoming a more active learner, as such information allows readers to take constructive initiatives to improve their learning and brain function, skills useful for people of all ages and particularly for students. In the discussion on improving long-term memory, Restak discusses scientific evidence indicating that active recall of what you have learned significantly improves memory. He then continues to point out that this research means that tests and pop quizzes actually result in increased memory. In addition, he notes that pop quizzes work even better when they ask the same questions that have been asked before!

Although Restak and Kim have done an admirable job introducing the first puzzle book of its kind, integrating neuroscience and puzzles, do not expect the book to be a particularly gripping read. Some of the insights in the book are hardly “surprising,” as the title of their book might indicate. Perhaps what is surprising, however, is the number of truisms, such as “choking under pressure,” that have grounding in neuroscience experiments.

Furthermore, some of their advice sounds somewhat gimmicky. Restak recommends students to sit on the left side of the classroom for introduction to art history, so that the professor and lecture slides would be to their right. His reasoning is that since nonverbal cognition is predominantly handled by the right parietal lobe, enhanced memory can be achieved if we engage the left parietal lobe as well. Restak suggests that this can be achieved by positioning oneself so that the professor is to the student’s right, thus forcing information to be passed to the left parietal lobe (the brain is arranged so that information from one side of the body is processed on the opposite side of the brain). While this is tenuously plausible, no scientific evidence is cited.

To be fair, these are only minor faults with the book. Overall, The Playful Brain is a worthwhile read for anyone interested in a practical understanding of how thinking works and how to think better. And perhaps a test of Restak’s “intro to art history” gimmick can be left to the reflective and curious reader!