Turning Trash into Gas: The Future of Plasma Gasification

Situated along the highway in Arlington, Oregon, what looks like a hill from afar reveals its true identity only upon a closer look. This is the 700-acre Columbia Ridge Landfill, one of the largest in the United States. Each week, 35,000 tons of mostly household trash arrives here from Seattle, Portland, and other communities.

While recycling has become more deep-rooted in public culture, two-thirds of household waste still ends up in landfills. Therefore, conventional recycling strategies are not the complete answer. But what lies tucked away in the southwest corner of the Columbia Ridge Landfill could be a solution.

The Columbia Ridge Landfill is home to the first large-scale commercial plant in the United States that uses a technology called plasma gasification. Developed in part by Jeff Surma and S4 Energy Solutions, the plant converts municipal household garbage into syngas, a mixture of hydrogen and carbon monoxide. Unlike conventional waste processing methods such as incineration, the process does not produce harmful byproducts like dioxins; instead, the syngas produced can be used as fuel or sold to industry, a groundbreaking recycling feat that has brought plasma gasification increased attention nationwide.

Here is a step-by-step overview of the process:

From the Wired article (https://www.wired.com/magazine/2012/01/ff_trashblaster/all/)

1. Gasification: The waste is shredded and travels to the top of a large tank, mixing with steam and oxygen and falling into a 1,500 degree Fahrenheit furnace. This gasification transforms a majority of the waste into a mixture of gases that heads to the syngas chamber.

2. Plasma Blasting: The undestroyed material enters another specially insulated cauldron where two electrodes create an electric arc (akin to a bolt of lightning) that produces a stream of plasma, breaking down the gases into their constituent atomic components and producing more syngas.

3. Hazardous Material Collection: A joule-heated melter sits at the bottom of the second cauldron and traps any hazardous material left over from the plasma-blasting in a slurry with molten glass.

4. Recycling: The slurry is drawn out of the system and becomes inert. In this state, the molten glass can be converted into low-value materials like road aggregate. Any metals are also captured here and later recycled into steel and other products.

5. Fuel Capture: The syngas captured consists mostly of hydrogen and carbon monoxide. After purification, it can either produce electricity or be sold and converted to fuels. 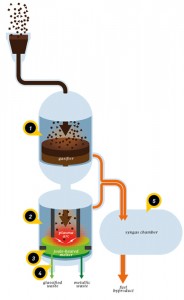 Theoretically, the process seems foolproof because all byproducts of the reactions are dealt with and useful resources are generated. However, some environmentalists believe this efficiency discourages recycling and the development of renewable products while encouraging more apathy toward trash. Furthermore, up to this point plasma gasification has been too energy- and capital-intensive to handle mass amounts of municipal trash in landfills. “The problem has been over the years trying to find that economic sweet spot,” said Joe Vaillancourt, the liaison between S4 and Waste Management, a $15.4 billion company headquartered in Texas.

Surma and the team behind S4 hope to address these challenges soon. Since the plant at Columbia Ridge is a test facility, they are working to fine-tune the process until the technology becomes ready for expansion. A significant breakthrough was installing a gasifier on top of the electric arc; this “pre-heats” most of the trash so that the plasma heater uses less energy on the remainder of the process. S4 also hopes to make the plant self-sustaining, so that the syngas will be burned to supply the power necessary to run the melter in the system. By S4’s predictions, once the Columbia Ridge facility is running at full capacity, it will process 25 tons of waste per day.

Meanwhile, corporations such as Waste Management are actively channeling funds toward research on plasma gasification and similar technologies. Increased market in the past few years has taken plasma gasification from small companies to a national level; in August 2012, for example, the Department of Agriculture announced a $105 million loan guarantee to Fulcrum BioEnergy to build a similar system outside of Reno, Nevada. This complex, which Fulcrum hopes to have running by 2014, would use three plasma melters to process 400 tons of waste daily, an unprecedented feat for a commercial plasma waste facility. The increasing number of initiatives like this one is a sign that trash is changing at the corporate and even national level. Slowly but surely, we are developing ways to combat our trash problem and redefine the way we think about it.