Silvery white and soft enough to cut with a knife – at first glance, indium is unremarkable, just another faintly glittery mineral mined from the earth.

In fact, indium quietly plays a central role in modern society: it is the vital element used to make smartphone screens touch-sensitive, and it is used in the thin-film coatings of LCD computer screens and solar cells. Yet, like many of the specialty metals at the foundation of modern electronics, understanding the global supply of indium is not easy.

“What’s interesting about specialty metals like indium is that they play such a crucial role in modern technology,” said Dr. Barbara Reck, a senior research scientist who studies the ecology of metals at the Yale School of Forestry and Environmental Studies’ Center for Industrial Ecology (CIE). “Yet, most people are completely unaware of their importance.”

Reck and her colleagues at the Yale CIE pioneer the emerging field of industrial ecology, a field that investigates how factors like economics and politics influence the use of environmental resources. Their research is at the forefront of answering one imperative question on every national government and smartphone-user’s mind: do we have enough metals to keep up with technological advances of society?

The “Omnivorous Diet of Modern Technology”

A generation ago, most products were designed with fewer than a dozen different materials. In contrast, today’s electronics products use up to 60 elements, and a high-performance wind turbine can use two tons of one metal. This rapid expansion was mainly driven by technology’s growing appetite for specialty metals, particularly rare earth metals like neodymium, lanthanum, and yttrium. Characterized by tongue twister-like names, the seventeen rare earth elements comprise a wide assortment of unique magnetic and electrical qualities that medical diagnostic, automobile, and many other industries heavily rely on. Interestingly, rare earth elements are somewhat plentiful in the earth’s crust despite their label as “rare.” However, they are often not concentrated enough to make them economically exploitable.

Although these metals themselves are not new discoveries, many of their hallmark properties are. In recent decades, the dawn of a digital electronics age and the “green energy” movement boosted specialty metals into the spotlight, inspiring research to divulge their other potentially useful qualities. Simultaneously, materials scientists began mixing these specialty metals with other elements, creating new alloys with uniquely distinctive and exploitable characteristics. As a result, today’s devices are becoming sleeker, stronger, and smarter at a swifter pace than ever before, with progress seemingly limited by only the imaginations of inventors.

In reality, a very sharp, tangible limitation to such progress exists: the supply of these metals.

On a basic level, metals are not equally accessible in nature. Some mineral deposits, such as copper, are found all over the world; others, such as rare earths, are only found in one or a few countries. Furthermore, the majority of metals used today are mined as “companion metals,” tiny elemental traces that are extracted from the mine of another, more abundant “host metal.” For one million grams of zinc found in zinc mine, for example, you might find a single gram of indium.

However, the more imminent limitation to the supply of specialty metals is geopolitics. The standard illustration of this delicate balance is China, which supplies around 95 percent of the world economy’s rare earth metals. Following a diplomatic row with Japan in 2010, China restricted rare earth exports to Japan, and these essential metals fuel its electronics industry. Although the ban was lifted, China did continue to cut back on rare earth exports to the rest of the world.

The Yale CIE focuses on understanding how situations like this affect the global supply and demand of metal. Established in 1998 by current director Dr. Thomas Graedel, the CIE laid the foundation for a comprehensive understanding of the metal cycle: where a metal come from, how it is used, and what happens when it is discarded.

While analysis of a metal’s life cycle is useful to understand the present state of a metal, it cannot predict changes in supply or demand. So, in 2006, the U.S. National Research Council (NRC) started looking into the concept of “criticality” for a metal, a more comprehensive standard that is based on two variables: availability of the metal and importance of use. 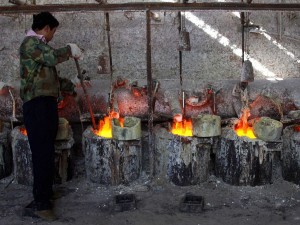 Reck cited copper as an example. “It would matter a lot if you didn’t have copper because it’s hard to replace copper in electronics,” she said. “On the other hand, its criticality is still considered low, because there is a low supply risk – you find a little bit of copper all over the world.”

Since the NRC report was published in 2008, the CIE has focused on developing and analyzing criticality assessments for all metals. Graedel and his group also extended the NRC definition to include a third dimension, environmental implications, in addition to supply risk and vulnerability to supply restriction. Any metal element can now be evaluated in this 3-D “criticality space.”

The CIE’s latest publication has elicited the most buzz. In a comprehensive study, Graedel, Reck, and colleagues evaluated how replaceable each of the 62 metals is for its major uses. According to their findings, not a single metal currently has an exceptional substitute. The best replacement for a metal would need similar physical and chemical properties to the metal, but such elements would likely be found in the same ore deposits in nature. Consequently, the best alternative for a scarce element would likely be scarce itself.

As a materials scientist with a lifetime of semiconductor research and a number of patents, Dr. Tso-Ping Ma is unfazed by this finding.

“In my field [of microchips], we react very sensitively to supply and demand,” said Ma, a former scientist at IBM and now the Raymond John Wean Professor of Electrical Engineering and Physics at Yale. “If something becomes very, very rare, people like us [materials scientists] will look for something else as good or better.”

Resource economists argue that if something becomes very scarce, its price will skyrocket. That high price will then spur development of substitutes for that material before society ever grinds to a halt. Thus, according to this argument, although indium is rare, we are not in danger of running out of smartphones or LCD screens, because increasing costs of indium will force an indium replacement to be found.

Their argument is not unfounded. A recent example concerns IKEA, the popular Swedish company known for its ready-to-assemble home appliances. Many of IKEA’s kitchen and bathroom products are made of a stainless steel alloy that, until 2003, included nickel. However, China’s rapidly growing appetite for nickel in the early 2000s led to a spike in the price of the metal, motivating some nickel users to look for alternatives. Consequently, in mid-2003, IKEA opted to completely eliminate nickel from its entire repertoire of stainless steel products and switch to ferritic stainless steel – not a small shift, considering the company’s annual consumption of stainless steel in 2007 was around 60,000 tons. [12]

In this age where virtually every element in the periodic table is used, IKEA and other forward-looking companies are focusing more on element scarcity in addition to product performance in their business decisions. “It’s a materials gamble,” said Ma.

If the supply of materials were more sustainable, this gamble could be less risky – one reason why scientists strongly advocate metal recycling. The goal is to achieve a closed-loop system where all materials are reused, thus creating zero waste. For example, lead use in batteries is nearly a closed-loop system; an estimated 90 to 95 percent of lead is collected and pre-processed from batteries. In contrast, only 5 to 10 percent of electronics’ platinum group metals are recycled.

Reck pinpointed two prime ways to improve metal recycling. The first is simple: improve collection. This applies to metals that are easy to identify and reprocess, like iron and copper, as well as to specialty metals that are used in tiny quantities in many consumer goods. Improving collection of these metals is especially important because many of them are used in electronic devices with short lifetimes and currently are not recycled at all.

The second challenge is to design products with recycling in mind. Today’s products are designed using diverse combinations of metals that make them more functional than ever before. However, this also means it is a lot harder to separate these metals; rare earth elements are particularly tricky to separate from a mixture because they share many similar properties. Furthermore, some metals, if not separated properly, can be disastrous impurities for the future uses of one metal – an expensive waste of both scarce and common metals.

So are we actually running out of metals? Experts at the Yale CIE cautiously say “not exactly” while emphasizing the importance of sustainability and offering a more nuanced perspective as their answer.

“A more insightful question is to ask whether supplies will be sufficiently constrained to impede routine industrial use,” Graedel wrote in a review for the MRS Bulletin. “There, our conclusions are on shakier ground.”