Lo and Behold: Reveries of a Connected World

Werner Herzog’s recent documentary, “Lo and Behold: Reveries of a Connected World,” takes on one of the most pressing questions of our generation: what does it mean to live in a world whose technological capabilities are nearly outstripping—or perhaps have already outstripped—our comprehension?

The actual science behind the machines investigated in the documentary is somewhat sparse, limited to flashes of chalkboard equations and over-simplified explanations. The point, it seems, is to have the viewer meditate, rather than think; the scenes have a dreamy quality, courtesy of Herzog’s polished directing and the natural visual appeal of machines in motion. The viewer is left with the impression of experiencing a reverie of the musings and questions that life in our brave new technological world inspires. The documentary does a fair job of representing both the bright and dark sides of technology, from a community of modern-day hermits living away from the wireless signals to which they have severe reactions to scientists testing software that can translate brain activity to images on a screen. 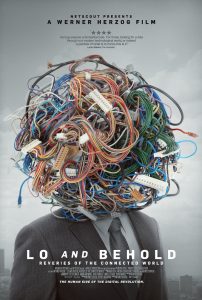 Herzog is excellent at finding examples of human-technological interactions that the average viewer might not have considered—when was the last time you thought about how difficult it would be to navigate life with a debilitating reaction to wireless signals? To that end, it would have been satisfying to see Herzog’s take on the more sensitive and controversial topics regarding technology today, such as drone-enabled warfare, identity theft, “revenge porn,” and international cyber-hacking. Herzog briefly touches on related issues, but leaves something to be desired; his questions give the impression of a leaf rippling the surface of the techno-ethical pond, rather than a pebble thrown in. Exploring the possibility (and consequences) of a trip to colonize Mars, for instance, is charming, but admittedly not a high priority for people not named Elon Musk.

Nevertheless, it was refreshing to see a documentary that seemed purposefully removed from the chaotic pace of everyday life, with all its difficult questions. One of the most charming scenes was of a group of monks standing under a tree, heads bent over their smartphones, with the narrator asking, “Have the monks stopped meditating? They all seem to be tweeting.” Another hypnotizing scene shows an android meticulously pushing a cart to the center of a room, arranging everything on the cart just so, then carefully unscrewing a canister of orange juice, pouring it into a cup, and handing it to the nearest human.

Viewers looking for the next hard-science documentary might be better served elsewhere. However, to those looking for a charming, thought-provoking evening watch with friends and family, lo and behold—this is the documentary for you.